With artichoke season here and the delicious if at times intimidating vegetable widely available, I wanted to share a highly adaptable (e.g. use what’s on hand) recipe for stuffed artichokes.

The first thing to know is how to trim the leaves.  When you first pick up a ‘choke, you’ll notice that each of the leaves comes to a sharp point (a thorn really) and because of their thick and layered nature seem tough to trim.  But it’s actually really easy – just use kitchen scissors and it takes about :15 seconds to work all the leaves.

Since in this case we’re making stuffed artichokes, you can trim the leaves way back – you can only eat the bottom part anyway (more on that later).  Once you’ve removed all the thorns, continue by pulling out the center leaves, which are much less dense – they will pull out very easily.  Trim the outer leaves back even more if necessary to get down to the very center, which you’ll see is covered with short, thistley type fibers.

Once you’ve trimmed the leaves, use the scissors to cut off the stem, so that the bottom of the artichoke is flat.  The stem will also cut remarkably easily.  Save the stems as they’ll be peeled/trimmed some more and then used in the stuffing. 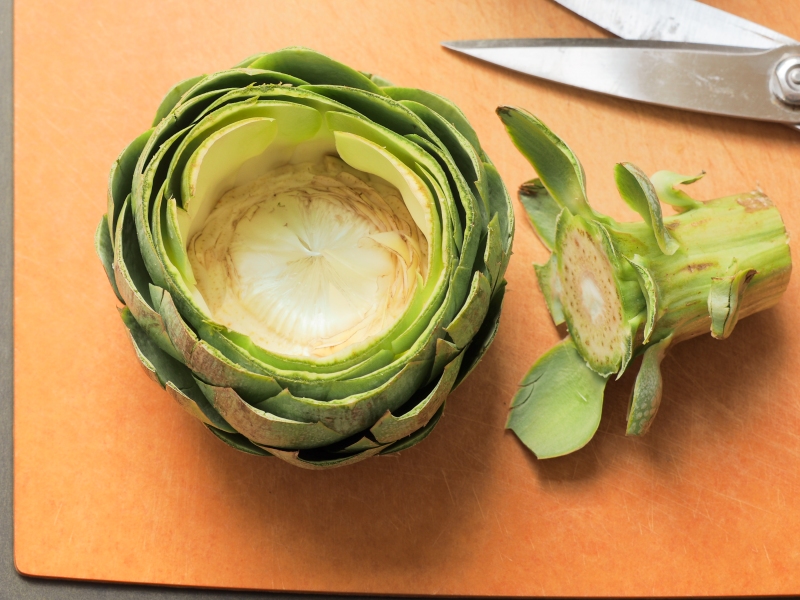 Next, use an ice cream scooper to removed the fibers, which sit just above the ‘heart’ of the artichoke.  The brown part you see in the photo below is the artichoke heart.  It turns brown almost instantly once the fibers are removed, nothing to worry about. 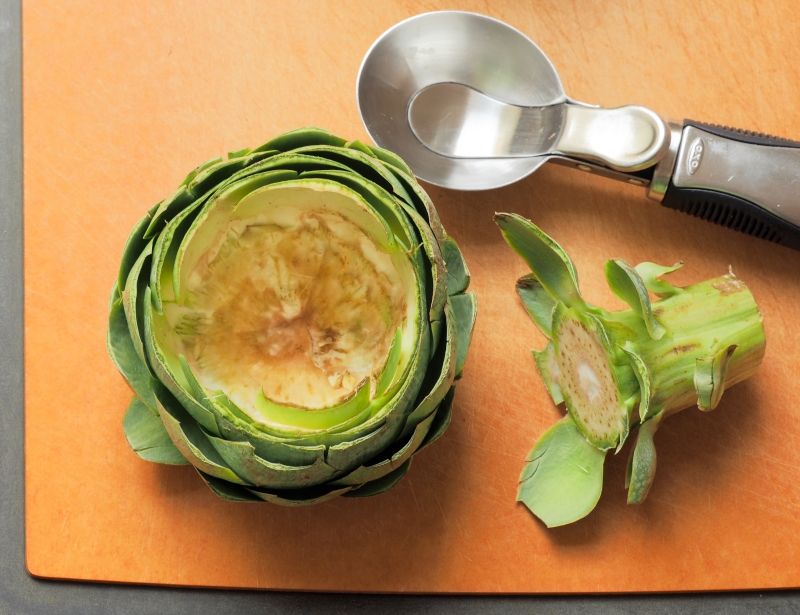 Now, 2-3 minutes later, you’re ready to stuff and cook the artichokes!  It’s really fun to serve these since they are unlike any other food likely to be in the average repertoire.  They are pretty to look at and delicious to eat.  And you now know that they’re really easy to prep.

The recipe below is more of an art than a science – if you don’t like a strong garlic presence for example, simply use less that what’s listed here.