Do you ever pass by bakery windows or stare into their cases while waiting for coffee and long to order one of the beautiful treats therein, to enjoy both studying it for its beautiful shapes, colors and texture and eating it for its deliciousness, but stop yourself because it’s too indulgent from, well, all angles?  Or fall down the rabbit hole of gazing at said treats online, but worry that you won’t get the assembly right, or it will take too long, or it’s too fattening, and decide not to bother?  (Do I sound like the Jordan Belfort of pastry??)

If so, you are not alone – I have been there!  It’s really fun to make beautiful food, esp when you get to share it, and there is a special element that goes with dessert.  Years ago, I went through an intense phase of making elaborately decorated sugar cookies (which I sold, and ate), mainly because it was so much fun to see the finished product arranged on the table or at a place setting.  The challenge though was/is that I don’t really want to have sugar/butter bombs sitting around the house, plus at this point I am running out of people who will eat them.  Also, I’ll be honest those cookies took a dog’s age to make…  So I like to play with health(tier) treats that are still beautiful.  I don’t mind taking a *little* extra time, but when one comes together that is quick, pretty and a good option for the waistline, it’s just gold.

Enter the galette.  You get to create a sort of rustic beauty with the uneven edge (read: imperfections are good and you can work fast, no weaving, no cookie cutters) combined with the pretty fruit center, which provides both color and pattern.  But unlike tarts, which can have a heavy custard between the crust and the fruit, these are really just fruit and crust.

I was disappointed when I realized that I missed apricot season entirely this summer, because the density of apricots makes them great for galettes – you don’t have to cook them before hand.  But!  Pluots, aka Plum/Apricots, are here and they are going to work well too.  I got these at my new local farmer’s market and choose the variety called Flavor King (!).  I’ve also noticed them at Whole Foods.  I got all of the pluots for this tart with several left over for $8.50 and used cupboard ingredients for the rest of the recipe. 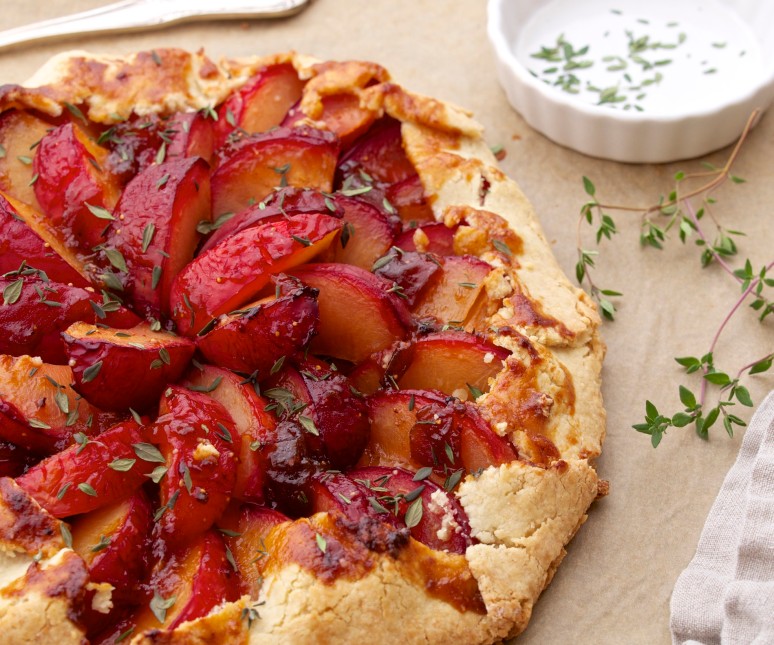 On to some details about the recipe:

Finally, a quick note about the recipe below.  This comes together quite fast.  I tried to spell out the steps so that when you follow them, you’re prepared for what comes next, vs having to back track to sort out what goes where.

The crust is very crummy before it’s baked. This is the trade of using less butter.  It’s important to resist the urge to add a splash of water when you’re making the dough ball (it won’t be a perfect ball, some crumbs will be all around it) and rolling it out – but it really does work if you stick with it.  My biggest challenge was the presented by the edges upon rolling.  If they break apart, gently press them back on and continue.

On the topic of the crust edges.  Just before baking, they are folded up around the edge of the fruit.   At this point the galette is still flat, sitting on a piece of parchment paper on a baking sheet.  I used the parchment paper as a tool – by lifting the paper up to guide the crust into a folded position over the fruit, I was able to address larger sections of the crust at a time, thereby minimizing tears and breaks.  Then I pressed the crust onto the fruit so that it would stay in place.