Is it just me or is there a teeny bit of a Chicken Little syndrome about the end of Summer going on at the moment?  It’s true that the season is coming to a close, but since two weeks ago it feels (on certain social media channels anyway) that this year the transition started earlier and is more akin to impending doom than simply the beginning of Fall.  Which by the way is still almost three weeks away and was over a month away when I first started noticing the hysteria.

Still, it got to me and I started thinking about life without fresh tomatoes.  (Even though yes, several vendors have them through October!  I folded under peer pressure, what can I say.)  And since we’ve just unpacked our beloved Le Creusets and kitchen tools, I admit to an earlier than usual hankering to get in front of the stove.  Tomato-a-geaddon plus a rediscovery of all things homemade I guess is what led me to checking out tomato jam, and it’s none too soon because is nothing short of awesome.

It’s delicious and *super* versatile.  So far I’ve had it on soft cheese, on eggs, and in a sandwich with avocado, proscuttio and basil in a riff on a BLT.  Soon we’ll try it with pork chops.  There are several ways to make tomato jam – some are sweet, some are savory.  This one strikes a balance, with the bacon adding just the right amount of smokiness.  You know how sometimes, a dish is good but not great, and leaves you wanting something more that you can’t quite put your finger on?  This jam alleviates that problem and adding it to even a small morsel makes the bite satisfying thanks to the flavor combination.  Try it on a small avocado toast and see what I mean. 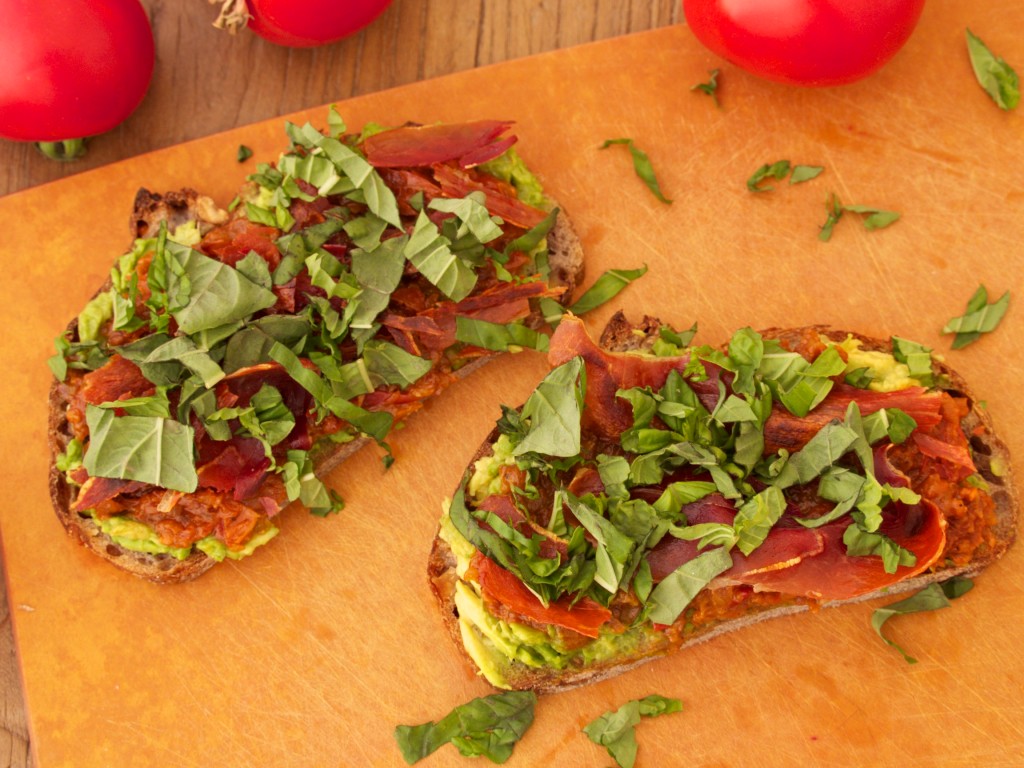 What I love about actually making this recipe is that the majority of ingredients are added all at once.  What that means is that as you get organized, you’re working with just one main ingredient bowl (vs having to separate out multiple ingredients that are added at different times) as you set up your mise en place.  Maybe it’s just the kitchen-prep nerd in me talking, but I think that’s a recipe attribute worthy of a shout out!  Also, cleaning this up really fast and easy, which you don’t assume when you see the words ‘homemade jam’.

So many uses – enjoy!

Note: A version of this recipe first appeared in Serious Eats.  I cut the quantity of bacon in half, doubled the tomatoes and updated the hands-on time.