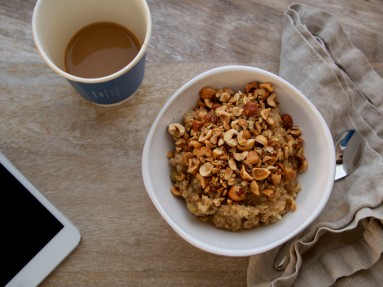 Happy 4th Day of Spring!  So far, the season has been a little cooler than we’d hoped, starting with a snowstorm and opening today with a steam signal from across the street that it’s definitively cold and windy outside.  I’m not quite sure where this puts our score for March (the pros and cons of the month are oft debated here), but as we discussed our Monday morning grab and go breakfast yesterday, Paul suggested oatmeal, with the rationale that we’re not out of the woods yet in terms of cold weather.

Overnight oatmeal is so reliable, just may be worthwhile anytime of year, but for now it’s clearly appropriate.  The challenge at the moment is that we’re in an in-between period in terms of fresh toppings.  Apples and pears are on their way out, but it’s too early for cherries and berries.  (We have dabbled with blueberries and strawberries lately but with mixed results, and therefore are waiting until they’re locally in season.)  Strong cinnamon flavors are warming, but maybe getting a little sleepy after fall and winter.  So when prepping today’s early morning meal, I tried a technique inspired by a bowl ordered while visiting Colorado this past January – for liquid I used two parts apple cider, one part water.

The result is delicious!  The oats have a lighter, brighter flavor, and no additional sweetener is needed.  I added a cinnamon stick to the boiling oats, which provides a subtle balance vs. the more forward taste produced by ground cinnamon.  Stirring in golden raisins while reheating allows them to plump up some while maintaining a bite, and topping with hazelnuts delivers a stronger flavor quotient plus delivers protein, unsaturated fat, Vitamin B & folate.

– Melt 1 teaspoon of butter over medium heat in a 2 quart (or greater) pot.

– Add the cup of oats and stir to toast/until the butter is throughly absorbed, 3-5 minutes.

– Add two cups apple cider, one cup water and cinnamon stick and bring to a boil.

– Add the pinch of salt, stir, and turn off heat.

– Cover, and leave on the burner till morning.

– Turn the burner with the oats to low heat. Uncover the pot, remove the cinnamon stick and stir in the golden raisins.

– If you like, add a splash of milk or almond milk for a little creaminess.

– Once the oats are heated through, place in serving bowls or to-go containers and top with the hazelnuts.