So there may or may not have been a major snowstorm in the New York metropolitan area.  One thing is for sure though, it’s really cold!  Why?  Because at the moment it’s Winter.  Could the media’s love of hyping the Winter season perhaps explain the broth trend that’s been heating up since the beginning of the year?  (i.e. You must have broth to survive winter?)  I kid – I think the broth trend is explained by other fundamentals:  broth is good for you, satiating, not fattening, warming, and inexpensive to make.

For these particularly cold days, broth is certifiably crave-able.   I love homemade broth because it is the most delicious, I know what’s in the recipe, and I like the feeling of not being wasteful with the chicken carcass after we’ve made roasted chicken.

That said, broth alone is a great hold-me-over but not really a meal.  Enter Coming in From the Cold Chicken Soup, which is homemade stock based.  It will kill the chill you carry in from these single-digit nights and (though I hope it’s not needed for this) make you feel good if you’re getting a scratchy throat…

Time:  Minimum two hours as recipe includes roasting chicken.   This soup may be made in advance.

Servings: Four.  Will keep in the fridge for three days.

– One Handful of Fresh Parsley per Serving, Coarsely Chopped or Torn

– Prepare the chicken for roasting.  (Here’s the link with specific steps re my favorite roasting recipe.)  Set-up of a roasted chicken is a five – seven minute affair.

– Place the chicken in the oven and set timer.   As noted in the link just above cooking time varies by weight –  calculate 20 minutes per pound.

– While the chicken roasts, prep to make the soup by peeling the carrots, then cutting them into round slices or half slices, as shown: 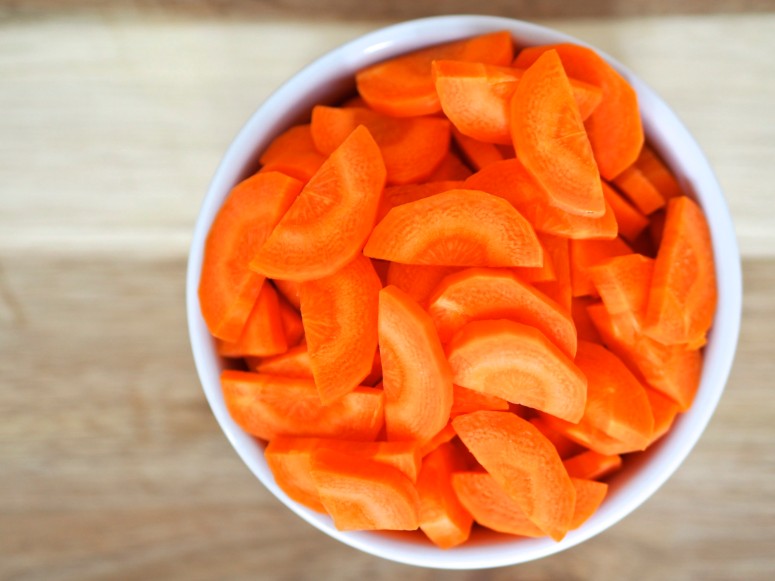 – Set the chicken stock in the heavy bottomed pot on the stove top.

– Set a protective trivet on the counter and place a sheet of aluminum foil large enough to cover the chicken.

– When the chicken is done, set the roasting pan on the trivet and cover the chicken with the foil.  Let rest for 20 minutes.

– Then, heat up the chicken stock over medium heat until it just boils.

– Add the carrots to the stock once it’s just boiling.

– Remove the foil from the bird.

– First removing the legs and then the breast meat from the bird, setting all on the cutting board for ease of operations.  You may wish to save the skin but do not use it in the soup.

– Remember to save the carcass for making more stock!  You can save it right in the baking dish until the next day, or make more stock along side your soup.

– Pull/shred the meat into smaller, bite-sized pieces, removing unwanted bits and bobs as you go, as shown:

– By now, the carrots will be well on their way to being cooked.  They should be soft but not mushy, and not at all crunchy.

– Once the carrots are cooked, add the pulled chicken.  Stir and add salt & pepper to taste, until the chicken is warmed.

– Ladle into a bowl and add the torn parsley just before serving.

Hearty bread will round out this warming meal!