Since I love them so, and since it’s the season for them, I’ve long and lately often pondered, what makes certain hearty sauces so good?  One thing I’ve always admired is when the sauce has a velvety feel to it, even though the ingredients started out as anything but.  The taste is consistent bite after bite as the sauce coats the food uniformly.   Also, the best sauces have loads of flavor and an element of freshness.  So it’s not about cooking things down into mush or trying to break ingredients into ever smaller pieces with the back of a spoon in the pan.  (I am speaking from some unfortunate experience here.)  Quality ingredients are obviously of importance, as are proper ratios.  There’s something else though!  After lots of trial and error, I believe I have landed on an underrated component that makes home-cooked sauces more exceptional.  It is the Fine Dice.

In many restaurants, is it a significant part of a few people’s jobs to prepare finely diced vegetables for a single meal shift.  That said, how practical is it to be Fine Dicing at home?  Between work and working out, eating, sleeping and let’s hope some relaxing, do we really want to spend precious minutes chopping carrots and celery into matchsticks into teeny-tiny cubes?  What about a food processor?

Ah the food processor – true, it will chop veggies down in a fraction of the time.  The main reason I don’t use the processor for vegetable chopping applications is that I simply think they are better done by hand – I find the shredded version created by the processor to be much less appetizing.  (Onions *can* work, but then fine dicing onions is one of the less time consuming Fine Dices.) Again we’re talking about use in sauces here.  The food processor is useful for many other jobs, there is no question.

So back to the task at hand, do we really want to spend our time standing at the cutting board?  I say yes, under the following conditions: that a time-per-meal analysis deems it worth it.  In other words, if you are going to make a batch sauce or stew that can both feed a small crowd and have leftovers to freeze for future use, is it very much worth the extra effort to Fine Dice since manually doing so yields such improved results.  You may spend an extra 15 to 20 minutes during preparation, but it will take you mere seconds to remove the future portions from the freezer.  Since most sauce and stew recipes do allow for ample leftovers, I could argue that it is always worth it to Fine Dice.  Which leads to the point that it’s almost always worth it to take the time to prepare more delicious food, because it will be more enjoyable (non-negotiable since we are eating many times a day) and as such you are more likely to eat a proper portion (also non-negotiable.)

And with that it’s decided – we are going to be doing some Fine Dicing around here!  Couple things to keep in mind – one, you can always do your Fine dicing at an earlier point in the day and store the veggies in a sealed container in the fridge, and two, having a method for Fine Dicing makes it relatively efficient.

So you won’t end up with sauces like my earlier versions, with mis-matched carrot wedges scattered throughout, I’ve listed a how-to just in case.  I choose carrots because Fine Dicing most other veggies will follow this system.  Celery, often called for along with carrots, is much easier!

To Fine Dice Carrots at Home:

Starting with a peeled carrot with ends trimmed:

– Cut the carrot in half or if necessary for ease of handling three pieces.  (This step is important.  Do not try to work with a whole carrot at once, as this is what will lead to frustration with Fine Dicing.)

– Starting with the larges piece, hold with your thumb on one side and all four fingers on the other, and make a cut down the middle of the root.  Then, cut in half again on each side of the middle cut, as shown: 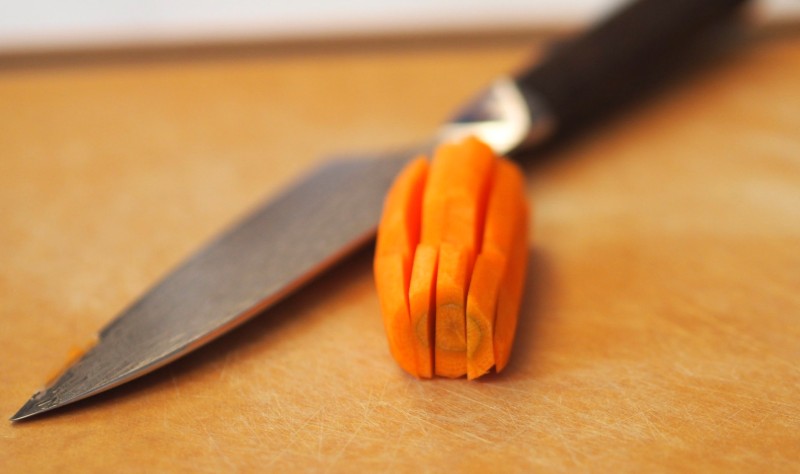 – Next, turn the cut carrot on it’s side so the cuts are parallel to the counter.  You may need to remove the outside edges and cut those separately.  Here’s what I mean: 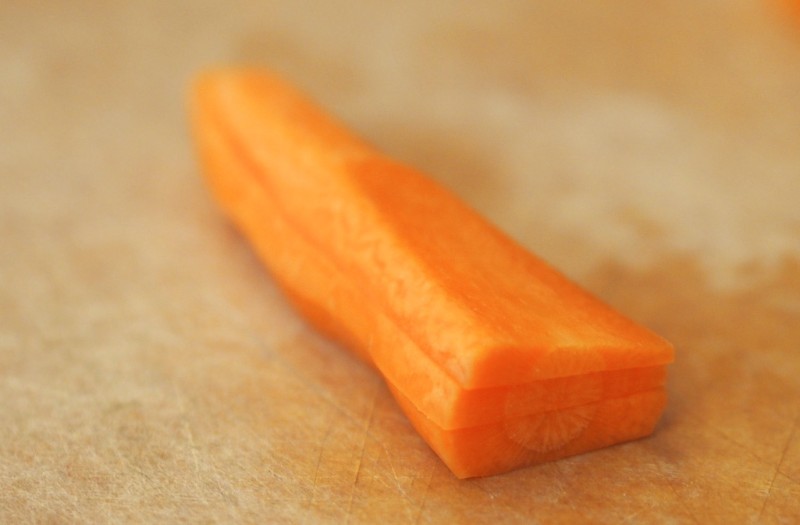 – Now, repeat the first step – hold the slices with your thumb on one side and four fingers on the other, and slice again to create matchsticks.

– Finally, slice the match sticks cross-wise and you will have your Fine Dice!  I recommend holding one end of the match stick bundle as you slice the other end – we are not on Chop’t racing the clock here. 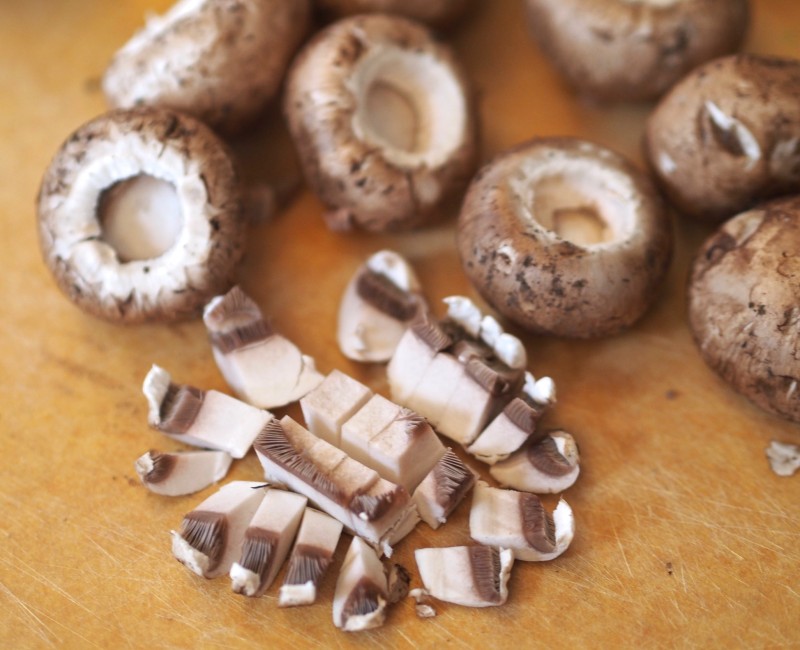