This oatmeal and stewed fruit combination is going to knock your socks off, whether you are fueling up for a long workout or a full day of last minute shopping, or feeding hungry guests during the holidays.  Oh, it is so good!  The inspiration for the stewed fruit came to me from a restaurant in my neighborhood that serves brandied stewed fruit over regular oatmeal.  This version doesn’t have the brandy, but it’s just as delicious.  And I think the steel cuts take you a little further, satiation-wise.

We’re adding no sugar to the oatmeal and less than average to the stewing recipe, instead relying mostly on the fruit for our sweetness here – you can enjoy this treat knowing that it’s not your typical added- sugar-laden oatmeal.

The following makes 3-4 servings of the fruit, plus 2-3 of the oatmeal.  The stewed fruit will keep in the fridge for a week – make the fruit this weekend and you’ll be in great shape for cozy, warming breakfasts over the Christmas week!  The fruit would also be great served with pork loin instead of applesauce or chutney.

For the Stewed Fruit:

For the Steel Cut Oatmeal:

For the Stewed Fruit:

– Place the cinnamon and cloves on the cheesecloth and make a spice bundle, tying with the twine, as shown: 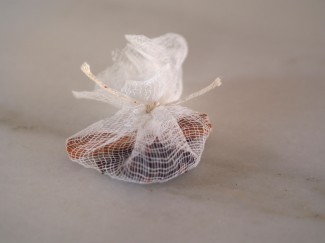 – Remove the rind and pith from the orange.  It’s easiest to use a knife to simply cut away both layers to reveal the orange flesh.

– Slice the orange cross-wise into 5-6 slices.

– Bring to a boil, then simmer, until liquid is reduced by half, gently stirring occasionally, about 20 minutes.  Try not to break up the orange slices as you stir.

– Remove from heat and discard the spices.

– Remove orange slices and any skins that have peeled off the dates.

Set in a bowl to serve immediately, or, save in an airtight container in the fridge for one week.  When serving from the fridge, to avoid it cooling your food, pull the fruit out before prepping meal to allow it to come to room temperature.

– Add the oats and liquids plus the dash of salt to a medium saucepan and bring to a boil, then reduce to a simmer, stirring occasionally.  Take care that the milk doesn’t boil over in the boiling phase, as it fluffs up very quickly.  Blowing on it assertively as you reduce the heat really helps quell an almost-boil over!

– At first during simmering, you’ll see only the liquid.  Gradually, the oats will appear as they take on the liquid and the overall liquid reduces.  Stir more frequently at this phase, scraping the bottom to prevent sticking.

– When the liquid is almost entirely absorbed, stir once more to incorporate any milk foam.

Serve immediately with the stewed fruit, and any garnish you like, such as slivered almonds.  Save any leftover oatmeal in an airtight container in the fridge for 3-4 days.