Morning Everyone – for breakfast this week I got pomegranates, which I consider the berry of the fall – tasty and juicy, sweet but not too sweet, great with yogurt & granola, in salads or on their own, and super, super beneficial.  They are in season now, and unlike other berries they have been known to make people fly.  Okay obviously not, but after looking into specifics on benefits, I found a remarkable list.  Pomegranates help with everything from your skin’s elasticity to your cartilage, plus have anti-inflammatory benefits, help overall cardio-vascular health and help eliminate free radials (which cause damage to your arteries as well as some kinds of cancer).  This breakfast or snack is an ideal way to start the week!

As delicious and wonderful as they are, there are admittedly a few barriers to entry when it comes to pomegranates.   You’ll see the red jewel-tone berries in containers in the produce aisle at this time of year, but like pre-cut veggies, they are significantly more expensive than the original article.   If you go for the whole fruit and just chop it open and try to extract the seeds, it’s not only a staining mess of juices and ruined fruit, it’s close to impossible.  The white flesh around them is pretty dense and it holds the berries very tightly – to attempt removal at this point is pretty much to ruin.  I read a recommendation somewhere to cut a pomegranate in half and eat the seeds with a spoon – this doesn’t work.

Luckily, one year early on Paul asked me if I ever eat pomegranates.   I explained that I had tried but gave up because it was too hard to get the berries out… A few days later, he got one and showed me a super effective and easy way to manage the pomegranate challenge!  Now I am going to show you.

Because there is a little prep time and about ten minutes of hands on time, I almost always extract the seeds in advance.  (They’ll last in a container in the fridge for a week, so you can prep more than one if you’d like a good supply and it won’t add much more overall time.)

You’ll need: One large mixing bowl, One smaller bowl, Water, As many pomegranates as you want.

– Step One – cut the pomegranate in half though its equator.  I recommend over your mixing bowl b/c inevitably there are seeds that get cut in half and squirt the juice which stains everything, and you have to stop the presses to quickly wipe it up.   Also you’re going to end up working in the mixing bowl so might as well use it from the start.

– Step Two – See the cut marks in the pomegranate half, shown above?  Make these with a sharp knife, cutting far up towards the pole of the half-sphere.  See cuts below for reference as well.

– Step Three – Turn the halves so that the berries are facing down in the bowl, and fill with water so that the fruit is completely surrounded (they don’t really get covered since they float), like this:

Leave them in the water for at least twenty minutes and up to an hour.  The water should be room temp – you’ll be working in the water so too cold will be uncomfortable and too hot just seems like it would be bad for the berries.

– Step Four – one at a time, remove the halves from the water and *holding over the bowl*, gently and slowly break apart the half-sphere.  It should be easy to pull apart and you’ll have 3-4 big pieces per half.

– Step 5 – Put all the pieces but one back in the water, and then working over the smaller bowl, begin to remove the seeds.  I do this by running my thumb over them, approaching the berries from a 45 degree-ish angle, and nudging/pushing them out of place.  You’ll get a feel for it quickly.  Once you’ve nudged all of the berries off of the most exposed portions, repeat the breaking apart motion again and you’ll find several more.  Repeat the nudging and further breaking until all the berries are extracted.  Scoop up any berries that have landed back in the water. 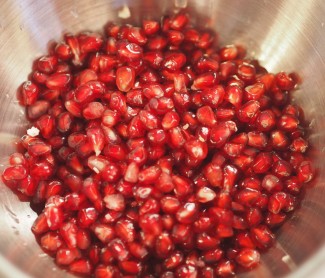 On average, you should get a cup and a half – two cups of berries per pomegranate.

Let me know if you agree that it’s worth the effort!  And thanks Paul!

One thought on “Pomegranate How-To”